BONN/BERN, 23 June 2013
4th European Forum on Music – Music and Politics: a shared responsibility
A successful undertaking for music and politics in Europe and Switzerland

From 19-22 June more than 100 representatives of the music sector from over 20 countries came to Bern, Switzerland, to discuss the commonalities and differences of music and politics from diverse angles. The local partners Yehudi Menuhin Forum Bern and the Swiss Music Council provided the perfect setting which included a rich musical programme.

The opening keynote speech of the Forum was given by Ivo Josipovic, President of the Republic of Croatia who, following a performance of his piece Samba Brevis by the Chamber Orchestra of Bern, addressed the audience with a presentation that was as informative as it was entertaining. He referred to the long tradition of musicians who went into politics and politicians who were or wanted to be musicians. He also presented various political contexts in which music has been misused by totalitarian regimes, and the role of musicians and composers therein. He made reference to Luigi Nono’s social and political engagement which he expressed in his musical work, to Daniel Barenboim’s West-Eastern Divan Orchestra and its contribution to reconciliation, as well as to diverse protest songs from different musical genres.

According to Jopsipovic there are common skills that both a musician/composer and politician need to have in order to be successful: listening, creativity & vision, communication with the audience, balance between freedom and discipline, understanding complex situations, high level of memory and concentration and organisational capacities. “Composers and politicians need to have adventures of spirit, and need to be patient and persistent”.

Enrique Baron Crespo, former President of the European Parliament and President of the International Yehudi Menuhin Foundation, highlighted the importance of music education as a fundamental part of humanistic education. On a personal note, he expressed his discontent with the latest developments in Switzerland, namely the federal popular initiative against mass immigration. Although not part of the European Union, Switzerland is in the middle of Europe and shares many of its democratic values – which makes this vote all the more disappointing for Baron Crespo. He drew a comparison with the latest European elections, which saw a rise in the populist and separatist vote, though which he is convinced was rather a call for change than to leave the European Union. He also reminded the audience that despite the disastrous gains for populist parties, 70% of voters were still in favour of the European Union.

In the speech that followed, Christa Markwalder, Vice President of the Swiss National Council, shared her view on the importance of music for education, as culture, arts and music help foster mutual understanding and respect. She took on Baron Crespo’s remarks by agreeing that Switzerland is very European being a “Europe en miniature”. Although she herself is not at all content with the outcome of the Swiss vote on mass immigration, she is still proud of the system of direct democracy which also brought about the Swiss Federal popular initiative on music education – in which more than 70% of votes were in favour of including music education in the Swiss constitution.

The session on “Freedom of Musical Expression” provided an insight into the situation of musicians in Belarus – the last dictatorship in the heart of Europe which is often forgotten about. Belarusian punk rock musician Lavon Volski shared his music and provided an insight into the realities of living as a musician who is banned from performing in his own country. To the question on whether he had ever considered giving up music he clearly said, “never, because I need to express myself through music”. A more general overview on the Belarusian situation was given by Ingo Petz, whilst Ole Reitov, interim director of Freemuse, introduced how his organisation works with music and censorship across the globe.

The 4th European Forum on Music provided diverse sessions such as a panel discussion with representatives from the European Commission, the Swiss Parliament and a Swiss singer/ songwriter/ comedian. It looked at the power of the amateurs, and provided diverse interactive sessions including a workshop on successful advocacy work, the European Agenda for Music, the Transatlantic Trade and Investment Partnership (TTIP), as well as diverse music projects that reflect the overall theme of “music and politics”.

The supporting programme of the conference was rich and diverse: it was opened by Alphorns, Yodelling and Bulgarian folk songs, it included the celebrations of the Swiss Music Council’s 50th Anniversary and a performance of “Le Sacre du Printemps” in the alternative cultural centre “Reithalle” – and not to forget the musical welcomes and intermissions throughout the days of the Forum.

The Forum was proceded by the EMC Annual Meeting which included elections to the EMC Board 2014–2016. The new board consists of
• Ian Smith (UK), President, Portfolio Manager Music & IP Development at Creative Scotland

The Board co-opted Cathy Al-Ghabra (UK), chair of the EMC Youth Committee.

Over the course of the coming days and weeks the EMC staff will work on up-dating the EMC website with presentations and photos from the Forum. 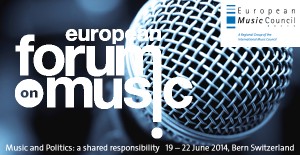 The 4th edition of the EMC’s annual conference, the European Forum on Music, will take place in Bern, Switzerland on 19 – 22 June 2013. The Forum will focus on „Music and Politics: a shared responsibility”.
Music contributes significantly to the political and social development of a peaceful and integrative Europe. In times where faith in the European project amongst the continent’s citizens is wavering as a result of failing currencies, austerity measures and rising unemployment, music and culture can play a pivotal role in restoring trust and enthusiasm for Europe, and nurturing social cohesion throughout.
On the other hand political, institutions at local, national and European level must provide the necessary frameworks for the full potential of music for a diverse and cohesive Europe to be reached. The slogan ‘unity in diversity’ is claimed by both the European Union and Switzerland to identify themselves. But what does this diversity look like? What are its challenges? And how is this diversity reflected in society? Inspired by the host country, the Forum will ask: What can Europe learn from Switzerland the so-called ‘nation of will’, a confederation in which the different communities strive for a united Switzerland by respecting the diversity of its society.
Together with its local partners, the Swiss Music Council and the Yehudi Menuhin Forum Bern, the European Music Council looks forward to welcoming you in Bern at an inspiring Forum full of dialogue, opportunities for networking and exchange, and not forgetting of course, music!